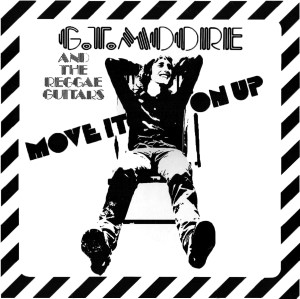 In 1979 it was proven once and for all that reggae music did not belong exclusively to the West Indies. In Britain the mod revival was responsible for highlighting the fact that British musicians were capable of playing ska rhythms and bands like Madness and The Specials put these rhythms into the charts. All of which makes us feel victims of deja vu, since five years back we were prophecising the succes of G.T. Moore and The Reggae Guitars, who were definitely before their time. Gerald Thomas was born in Reading, Berkshire in May 1949 and his early musical influences include R&B, South-American and Jamaican records. It was supporting visiting Jamaican artists like Jimmy Cliff that G.T. Moore and The Reggae Guitars got their own brand of reggae over to a wider audience - though they had effectively built up a strong following on the club and college circuit. G.T. had been in various R&B bands since his shooldays and his first pro band was a soul outfit named The Memphis Gents. He worked with Persian singer Shusha as her arranger and guitarist before forming The Reggae Guitars in the spring of 1973. The original lineup included Tom Whyte, Martin Hayward and Tim Jones. There were several variatons of their band, including at one point a three-piece brass section. at no point did Moore and his band set out to imitate or rip off the black music that was the biggest influence, but used the distinctive rhythms and clipped guitar sound to create a framework for his own material. The cream of their music was put into disc for two albums - “G.T. Moore And The Reggae Guitars” and “Reggae Blue”, from which the tracks of this album are compiled. Maybe the climate wasn’t right at the time, as their records were well received but didn’t achieve the succes they deserved. Still, with the new interest in white reggae, it is interesting to reflect that the sound of G.T. Moore And The Reggae Guitars still sounds as fresh and strong as ever. Which is definitely a case of better late than never. Liner Notes 1980