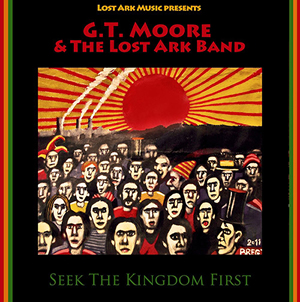 Belgian reggae band Pura Vida aka The Lost Ark Band – led by multi-instrumentalist and singer/songwriter Bregt De Boever – have previously worked with well-known heavy as lead roots singers and groups such as The Congos, Prince Alla, Sylford Walker and Congo Ashanti Roy. Now, they’ve teamed up with a completely different artist – the obscure pub rock reggae singer and musician G.T. Moore, who has played with giants such as Van Morrison, Dr. John and Johnny Nash. If you have ever searched the vinyl bins at a record store you might have stumbled upon Move It On Up or Reggae Blue released by G.T. Moore and The Reggae Guitars in the mid 70’s. I know I have, and I never bothered to give them a listen. But maybe I should have. Because G.T. Moore’s new reggae project with Pura Vida is a punch in the face. In a good way. G.T. Moore has a tone reminiscent of a folk singer. He has no rush and his voice is scared, honest and rugged. Seek the Kingdom First is musically in the same vein as previous Pura Vida material, i.e. highly influenced by Lee Perry’s heydays at his legendary Black Ark studio. It’s ethereal and swirling and you can almost feel the water drops slowly finding its way down the veins of the leaf in the humid jungle. The album collects six vocal cuts and two dub versions. The majority of the tracks run over five minutes and they are in no hurry to finish. The music is slow, mellow and beautiful. This album is currently only available on digital platforms, but previous Pura Vida material have been pressed on vinyl too, so this might change if there’s a demand. by Erik Magni, reggaemani.com