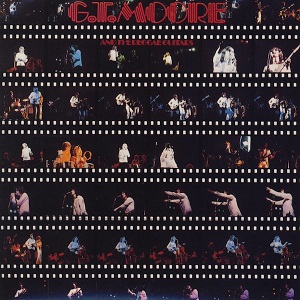 In retrospective it was often said at the time that G.T. Moore and The Reggae Guitars never really had the right producer to recreate the live sound on record. This album was produced by Dave Bloxham who had produced their favorit record of that time, ‘Funky Kingston’ (by Toots and the Maytalls) The brass players, the Sons of the Jungle, who Gerald knew from Johnny Nash, are featured on the album as well as on ‘Funky Kingston’. As is John ‘Rabbit’ Bundrick. However it’s fair tot say that the first album is the closest to their live sound. It contains the popular tunes from their live performances which were ‘Knocking On Heaven’s Door’, ‘Move It On Up’ and ‘Thou Shall Not Kill’. The original tracks were recorded in a provincial studio working on the South coast. But the final overdubs and mixes were done at Island, Basing Street, Notting Hill Gate. It just so happened that The Wailers were recording their on the night session and Rabbit played at nigh with The Wailers and in the day with The Reggae Guitars.  The sessions were mixed by Tony Platt, also the engineer of Catch A Fire. It was a unique time and The Wailers loved the idea off a band called the Reggae Guitars.